At the end of this month I will be attending my millionth dance recital! Ok, maybe that is a slight exaggeration but let’s say I’ve attended a bunch. My daughter danced for 14 years and now my god-daughter is in her 11th year of dance. She will most likely continue on for another 4 years so I still have a few years ahead of me before this comes to an end.

I love watching all the dancers and seeing how they have grown in talent and size from year to year. The 3 year olds class still gets the biggest applause because they are just so stinking cute. Most of them are so excited to finally get to be on stage and perform. They can be a little unpredictable but those big waves from the stage are adorable.

As my daughter grew up dancing, many of the girls stayed in the same classes together through the years and friendships were made 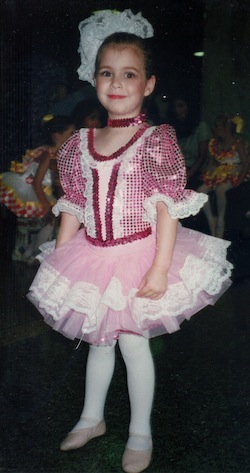 between the girls and also between the moms. There were also many dance moms to contend with over the years. I’m talking about the moms who got VERY involved in their child’s dance curriculum. One mom was even named “dance mom”. She was the person that every one else basically ran from. She was quite opinionated and just plain loud! She had no limits when it came to telling everybody what to do. She even tried telling the owners of the studio how to run their business on occasion.

One year, when my daughter was 14, I had the very unfortunate experience of having to confront this woman who stood at least 6 feet tall. It was time for the recital and all the students were at rehearsal. There was some confusion about which shoulder the one-shouldered costume was supposed to go across. Of course she was certain that her daughter had the costume on the right way and all the others were wrong. Her argument stemmed from which side the tag on the inside of the garment was on. In order to prove her point, she grabbed my daughter by the arm and proceeded to snake her hand up my daughters shirt feeling around for the tag. You can imagine how horrified my daughter was. This strange woman putting her hand up inside her clothes!

You have to draw the line somewhere and I figured it was past time for me to stop this mad woman! So…… I bravely approached her and let her know that under no circumstance was it acceptable to touch my daughter in any way. It was highly inappropriate for her to put her hand underneath the clothing of a child that was not her own and I told her if she ever did it again that I would file charges against her. A friend took a photo of me talking to this woman and you can see me holding my cell phone as we spoke. She is towering over me as I had the misfortune of choosing to wear flats that day. If you zoom in on my fingers on the phone, you can see my white knuckles. Yes, I was a little scared of this loud-mouthed bully of a woman but it was the mother hen in me coming out to protect my daughter. It’s hilarious to me now but at the time I was really nervous about confronting her. But it’s even funnier that she backed down immediately and apologized. I guess not many people have ever stood up to her.

I continue to see this woman at the recitals because she still has several children of varying ages that attend classes at this studio. It seems every year there is some kind of drama surrounding her that makes me laugh. I don’t even know if our throw down had any impact on her or if she even remembers me at all but I can tell you that I am remembered as the woman that had a throw down with “dance mom”! You can bet that I steer as clear of her as possible. I have no desire to white knuckle it again. But she better stay away from my god-daughter ’cause I will step in again if I have to. Perhaps I should wear high-heels just in case?