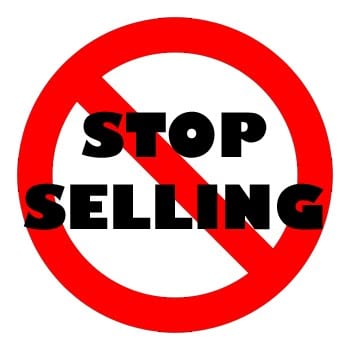 In one of my recent Continuing Education classes I had a Realtor tell me that they had never been in a class where the instructor actually told them NOT to sell. It was such a completely unheard of concept that she just had to remark on what a turnaround it was for her. To hear that she didn’t have to sell took a ton of pressure off of her shoulders. What a relief to know that selling someone wasn’t the goal!

Consider this: when you go networking, do you go because you want to buy something? Do you wake up that morning and think, “I’ve got to spend some money today”? Probably not!

When you are bombarded by someone trying to sell you something, how does it make you feel? Personally, I want to escape! I hate it when someone tricks me or corners me with their sales pitch. If they do this to me once, they’re unlikely to be afforded a second opportunity to talk to me because I will take epic measures to avoid them in the future.

If you are in the mood to shop what do you do? You hop on the Internet or head to the nearest store that sells what you are looking for. The one thing you don’t do is show up at a networking meeting hoping somebody will sell something to you.

We don’t go networking looking to buy so why would anybody show up trying to sell?

This has always baffled me! Wherever you go you will do better to just show up and start a few conversations and leave the “Sales Hat” at the office. Simply talk to people! It doesn’t even have to be about business!

If selling isn’t the goal, then what is? The goal is to start more conversations. See whom you connect with and keep the conversation going with those people by staying in touch. If you form a genuine, authentic relationship then you can talk business. They may not even be your customers but if the connection is real, they will talk about you and bring others to you. They will be your advocates!

Now that I’ve helped take away the pressure of making sales, it’ll be much easier to just go start those conversations!